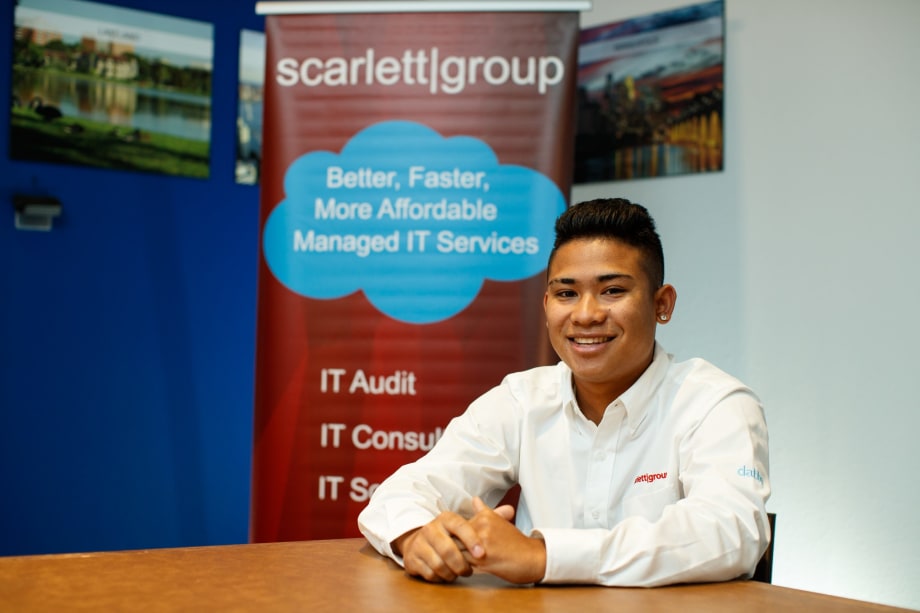 Alex and Matthew: A Strong Relationship

If you’re interested in a career in information technology, the Scarlett Group in Jacksonville, Fla., would be just the kind of place you’d want to land a job. The managed services provider offers IT audits, consulting, and support for mid-market and small businesses. And it’s where Alex now works after completing Generation’s IT Help Desk Technician program in Jacksonville.

He knows he would not have gotten this job if it weren’t for the Generation program. “All the requirements with Generation that I learned helped me gain all those skills to be able to bring it to the actual work field,” says Alex.

The free Generation program provides students with both the technical knowledge of software and hardware needed to do IT work and the job application and interview skills that will increase their chances of securing a position. After completing the program and taking its exam, students earn CompTIA Fundamentals and A+ certifications.

Alex actually got introduced to the Scarlett Group by another Generation alum, Matthew, who also works there. Matthew  recommended Alex for an internship with the company, which led to a full-time position.

“I talked to Alex’s cohort a lot when they were going through [the program],” says Matthew. “And it’s been pretty good watching him come up.”

Alex had always been interested in IT, working on computers at home over the years. After graduating from high school he looked around on places like Indeed for an IT job and realized he might need more qualifications to secure a position. He explored next steps like joining the military and attending Florida State College at Jacksonville, and it was at the latter that he got introduced to Generation.

Generation’s IT Help Desk Technician program not only gave Alex valuable industry certifications, but it also taught him how to market himself as a more attractive job candidate. “I didn’t really know how to build my own resume, especially coming out of high school,” he says. “They didn’t really teach about resumes at all. Generation made it sound better.”

Alex now has goals of going into cybersecurity down the road and feels like his current position will help launch a career for him. “I always want to move forward in IT,” he says. “I want to learn more. I want to expand my knowledge. I’m still learning now; I ask a lot of questions.”

Completing the Generation program and moving into a position at the Scarlett Group has also had a big impact on Matthew and his career prospects. “I had been chasing A+ certification for quite a while, and I just never felt ready,” he says. “That extra boost in confidence [from the Generation program] definitely helped a lot. When I came in [to the Scarlett Group] as an intern, they realized I had potential. If I was some random on the street, I would never be here.”

Getting connected with passionate, interested potential employees like Alex and Matthew is one of the major upsides of the Scarlett Group’s partnership with Generation. “We like the fact that not only do we have to want them, but they have to want us,” says Eric Franklin, technical support/customer service manager for the Scarlett Group. “I remember Matt specifically. When I looked at his resume, this is a guy that we’re looking for. And when he sat down, Matt was like, ‘I really want to work for you guys.’ It gives you an opportunity to work with somebody who is looking forward to working with you.”

That opportunity offers major potential for reward with little risk for the participating company. “Generation covers the cost of the interns, and we can run them through the paces for six weeks,” says Franklin. “And at the end of that six weeks, we can determine if this is someone we’d like to bring on as an employee and take it from there.”

Franklin also likes how the company’s involvement with Generation benefits the local area as a whole. “Anytime you have a local business supporting a local community and not bringing in someone from the outside, that helps with everything—morale, the economy,” he says. “The company is run like a family, so what better place to bring in more family than right here in Jacksonville.”

In Franklin’s mind, this is just the beginning, and he recommends Generation and its ReGeneration program for older workers to any company out there looking for talent. “Hopefully we continue the relationship and are able to bring in more employees from Generation,” he says. “Hopefully we can build upon what we already have which, is a pretty strong relationship.”

Change for Generations: The Legacy of Grace Hopper