Ihsan Muhammad was working two jobs and 16-hour days to make ends meet. In 2021, he took a leap with the Generation USA Junior Full Stack (JFS) Developer program and has now accepted an apprenticeship opportunity as a junior software engineer with McKinsey & Co.

Ihsan Muhammad was a 38-year-old father of three living in the Philadelphia area when he found Generation USA. To support his family, he was working nights as a delivery driver with UPS and taking on extra shifts with Grubhub and UberEats during the day.

“I was just going through the whole cycle or the rat race, working my butt off 60 or 70 hours a week,” Muhammad said. “That’s working 16 hours a day and paying so much in taxes, and it still wasn’t enough. So, I started to look for something different.”

When an old college friend connected with Muhammad on LinkedIn and recommended Generation, he was excited to explore his interests in computer science and software engineering. He had always wanted to learn how to code, and now – many years removed from his undergraduate experience – he thought he might actually be able to do it. 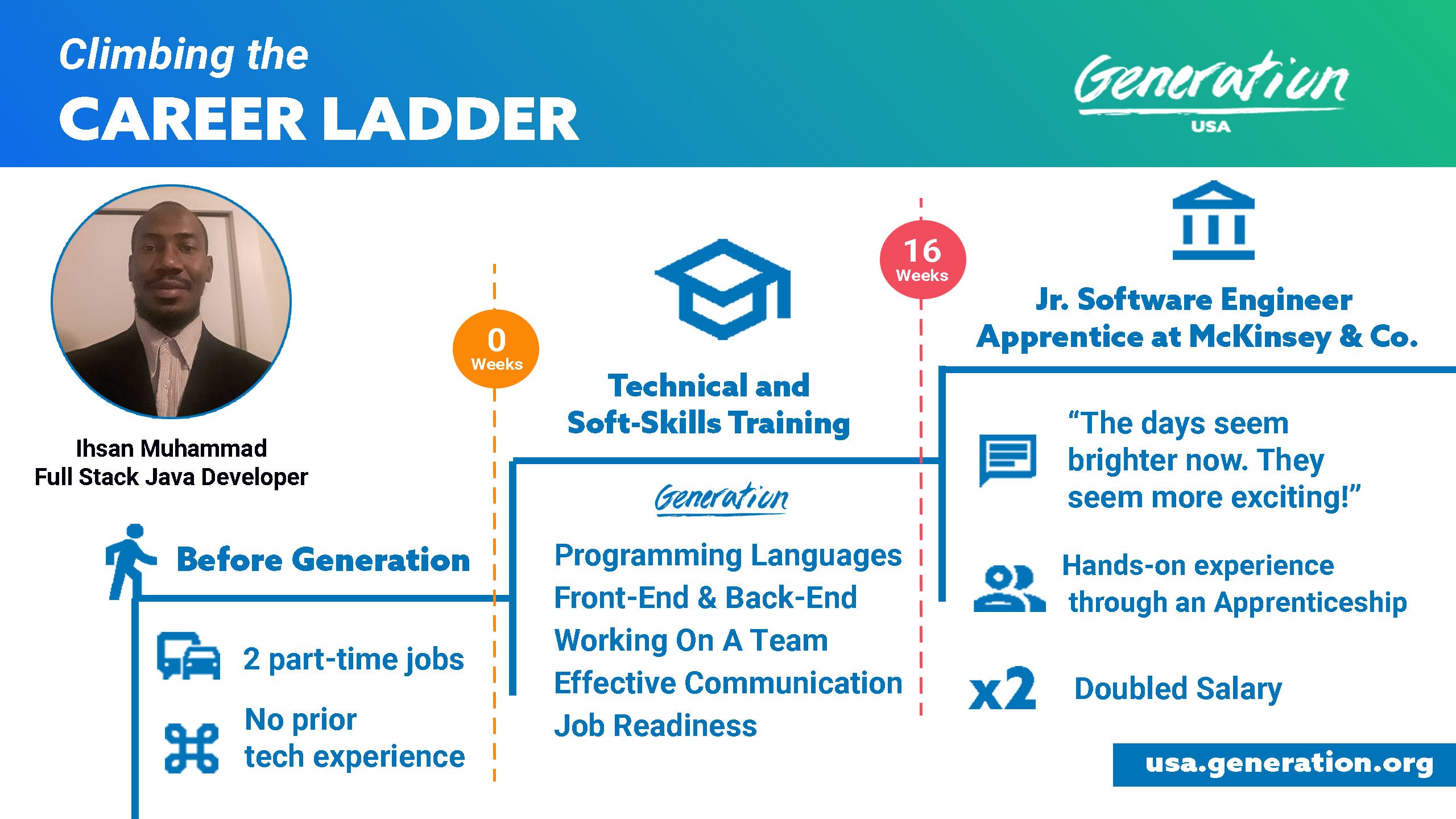 “I don’t know if I was my lowest point working those jobs, but I felt burnt out,” Muhammad said. “When I found Generation, I felt like, OK, I can do this, you know? Don’t let this negative experience define you. Let it be a learning experience, a lesson.”

Muhammad was encouraged not only by his friend – who was also enrolling in a Training Accelerator Program program to further her career – but also by the networks of support within Generation. In his previous work experience, he felt like he was spinning his wheels and getting nowhere. Generation promised the technical, mindset and behavioral training he would need to build confidence and transition into a career path he could count on long term.

He applied to the Junior Full Stack (JFS) Developer program and soon joined the Atlanta Cohort virtually from Philadelphia.

“I know everyone has challenges. My first challenge was that I didn’t have a computer or a laptop,” Muhammad said. “The second was that I had to keep working my two jobs throughout the program to make ends meet.”

Without a computer, Muhammad starting logging onto classes on his phone, but as the work picked up and the class started using Codecademy, he really needed a computer. He got by at first by borrowing his wife’s tablet and using computers at the local library, but he also lacked access to the internet at home.

As with so much of daily life, his coursework was further complicated by the COVID-19 pandemic. With pandemic restrictions, Muhammad could only access library computers for one hour each day.

“These are just like the challenges that I’m going through,” Muhammad said. “Eventually, I reached out to my instructor for support, and the instructor told me to get in touch with Generation. He said that they might be able to send me a computer so that I can actually do my work.”

Find the Support You Need

“I’ve been promised many things in my life,” Muhammad said. “Sometimes, you get to the point where it’s like, okay, let me call their bluff.”

Shortly after reaching out to Generation, a package arrived on Muhammad’s doorstep – a laptop, free of charge, so that he could commit to his work and keep up with fellow learners in the JFS bootcamp. With the skills he built at Generation, Muhammad has now accepted an apprenticeship opportunity with McKinsey & Co. as a junior software engineer.

“The team at Generation did something they didn’t have to do. They already provided the program, the curriculum, and then, to help me even more – that helping hand comes up under you and lifts you up,” Muhammad said. “I can’t put into words this experience.”

Samantha: “Generation Was an Answer to a Prayer”